I’m embarrassed and, even more than embarrassed, but ashamed to admit that when we began considering different special needs, parenting a child with a limb difference(s) terrified me.  How would we do things like go fishing with Derek’s family?  Or playing the piano like my family?  Guitar like his dad?  Using utensils?  School?  Bullying?  And if I’m even more honest, limb differences intimidated me even more than complex hearts.

He’s the best at using chopsticks out of every person in this house and most people I know.  And since he’s almost five, we will be tying the fishing pole to his wrist anyway because even some two handed, ten fingered adults I know have had to dive into the lake after their pole (not to name names…).  Also, he shows zero percent interest in wanting to play the piano or the guitar–but he would really like to play the drums, which is pretty awesome because Derek and I both played those too…and those are probably way cooler than anything else.  I’ve already decided that we’ll just add a little practice room onto the side of Derek’s workshop.  The J-man has a pretty awesome throwing arm already, and we’ve had to outlaw throwing things in the house because otherwise he’ll be buying a new tv with what’s in his piggy bank.  He writes his name and letters and numbers at the same level or better than his peers.

And if a kid asks him about his hands, he simply answers “these are just my hands.” End of story.

My fears were completely selfish and unfounded.  They were based on limitations I was setting.  God made those hands, and therefore those limits I set?  They don’t exist.

Ten fingers are so overrated.  I need to remind myself that the J-man takes his cues from us.  Now, it’s our job to show him how capable he is.  Because if we act like he can’t do something? He probably won’t.

Lately, he’s been playing with our fingernails, especially mine.  I don’t know what his obsession is with them, but he’ll pick and pull at my nails until they hurt and then hold out his hand, the one with his one special nail that we take extra special care of.  When it’s time to cut little toenails and fingernails, we make a big deal out of it for him because we know that even though he is so very capable how important this is to him to feel included.  We know he sees his difference and we know he’s looking for something in common with the rest of us. 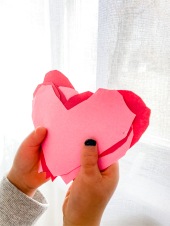 Today, the J-man came home with ten Valentine’s hearts that he cut out, all by himself.  You’d better believe that those hearts are all over our mantle, and then I’ll laminate them for his memory box.

Because he is capable.  And, he is different.  We can ignore the difference, we can treat him extra special, or we can celebrate the uniqueness that is our Judah-man.

When we knew we had a limb different son on the way (waiting in China), I asked for another special ring that I got for Christmas just before he was home, almost two years ago now.  I wear my thumb ring for our Judah, for his special thumb, and today, we are celebrating ten perfect Valentine’s hearts with special nail paint to help our thumbnails grow strong and tough and capable on the outside in hopes that we’re growing strong and resilient and so very capable, confident hearts on the inside.

Because like Judah says, “these are just my hands.”

And we want him to confidently use them in whatever ways God intends.